Saying 'You're beautiful despite your psoriasis', is not okay

You’re beautiful ‘despite’ psoriasis. It’s a comment I’m sure many women with psoriasis get. In my eyes it’s like being told ‘you know a lot about football for a girl’. These backhanded compliments are never the compliments people intend them to be. Rather they cut deeper than just a comment from a family friend or a stranger online.

Despite. Even though. Although. However. All these words are used to say a good thing along with a bad, two contrasting beliefs. You’re so pretty even though you have psoriasis. Your body looks good however, you could benefit from a diet. Your hair is nice that colour but I preferred your natural colour.

Admit it, we’re a society obsessed with appearance. People think that it is a compliment to be told that you’re a brilliant person even if your appearance doesn’t look like that. But what does that even mean? How can we be so vain to think that a person must be good looking to be a person worthy of attention and praise? How can we even categorise people so that certain features are associated with negativity?

I know I’m not the only one to talk about this issue and I acknowledge that I’m not going to be able to stop this constant stab at appearance people receive but I hope I can challenge the way we talk to others, especially around psoriasis. I can only do my best to educate and further this conversation.

A history of misunderstanding

It’s not like psoriasis is something new to the world or society. The word 'psora' means ‘to itch’ in ancient greek and Hippocrates talked about dry skin flakes, lopoi as he called them, which psoriasis is so well known for. Maybe I find it fascinating because I’m a classicist but there is something so valuable to me about the fact that people have been discussing our skin for millenia. It’s a shame that the sources we have from history involving psoriasis are strictly medical but I feel as though it is easy to grasp that it wasn’t well liked. No one was going to paint patches of pink onto their skin anytime soon; it wasn’t going to become a trend seen across aristocracy. For so long throughout history our skin was confused with other conditions and illnesses such as leprosy. In France in 1313, people with leprosy were burnt and imprisoned under the orders of Philip V, which due to lack of understanding seen starting from the 5th century BCE and earlier, it is likely that those with psoriasis were included in this .

Now I am in no way saying that the comments we get in the 21st century are similar to those in the 14th century, but I wanted to give some context to why we as a society have such a deep rooted negativity for psoriasis, especially for those who do not suffer from it. Surely they have no right to view it so negatively when they themselves do not have to struggle with the years of insufferable itching, the sore skin and desire to just have a break from it all! Looking back at all this history it is somewhat not surprising to me that I get the questions of “Is it contagious?” or “It is deadly?”.

I can assume if you are scrolling along through Instagram, following through profiles of those with psoriasis you most likely know the answers to those questions. If you don’t, I’ll tell you now. No. No, getting near me will not pass it to you. No, I will not have my life shortened due to a few patches of pink skin. No, it is not polite to ask a stranger invasive questions about their appearance. No, we are not your personal google search report.

Perhaps I’m being too harsh here, but after years of being told I have a bad sunburn on my head and should wear suncream next time I go out or being told I should cut things out of my diet or that I must not be trying hard enough to take care of myself, I am tired of the comments we get for simply existing with a visible condition. I know people mean well, the same way being told you’re beautiful even though you have psoriasis is meant to be a compliment, but it is not your burden as a stranger or follower or coworker to carry.

This doesn’t just go for strangers online or acquaintances, the same needs to be addressed with those closest to us. Our loved ones aren’t safe from damaging us, in fact it’s those we hold in the highest esteem that can knock our confidence the most. People make jokes about your skin thinking it won’t hurt because they love you, but that’s not the way words work. Being told ‘oh you look nice but I wish we could clear this skin up’ hurts more than being told that by a stranger online. When complimented loved ones you do not want to be reminded of something that already weighs heavy on your mind and soul, especially when they should see that weight so clearly themselves. 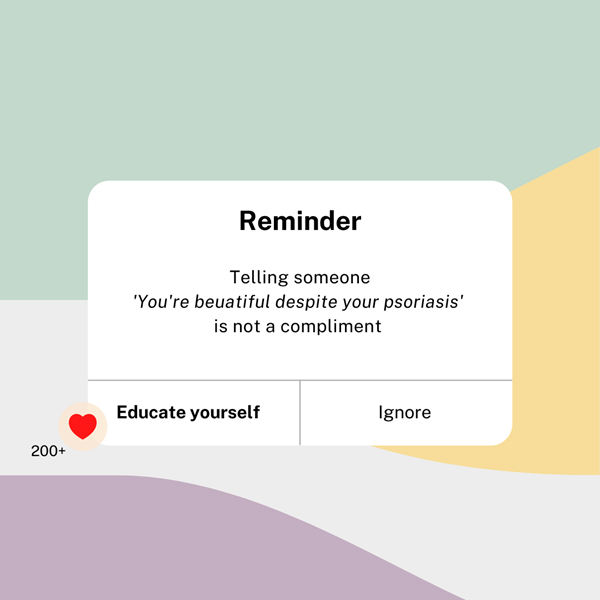 So you may be wondering ‘okay then how do I change this behaviour?’.

The simple answer is to not mention someone’s skin unless they bring it up themselves, and when they’re being negative about it do not see that as your chance to bring your own negativity to the table. When we look in the mirror, no matter who you are, we see all our flaws, we do not want them being pointed out by those around us. I think we should all stand by a rule that if someone cannot change it in a brief second, do not comment on it with negativity. This doesn’t only go for skin but for everyone about appearance. Unless it’s a little bit of lipstick on the teeth or an out of place hair, don’t comment on it.

I just want to finish off by saying that if you’ve ever said something similar to the phrases I’ve used here, please do not feel bad. We cannot go back and undo our mistakes; we can only look forward. The best thing you can do is educate yourself and go forward being conscious of what you say. This isn’t meant to be a lecture, this is just me trying to educate those who perhaps were not aware of things so that in the future we can have a kinder and positive world. We can only become better by building a dialogue where we share how we feel.